February is oftentimes thought of as the month for lovers—a month shared with affirmation and tender feelings towards one’s significant other. Yet this pink and red-themed month is also a month filled with the feast days of saints who exemplified great virtue and selflessness, some of whom who were single and offered their gift of celibacy to the Lord. So while considered the month of colorful candy hearts, less-than-mediocre mystery chocolates, giant teddy bears, and a great excuse for a fancy date night, the month of February is also a reminder for us to call on the saints who lived out chastity so beautifully and to ask them to intercede for us in our own journey to live out pure and chaste lives—married or unmarried. Let’s look to them as models as we fight pornography in our lives or support those who do. Here are just a few of them…

You may recognize this saint’s name if you have ever been at Mass on his feast day. It is common for parishes to offer a blessing of the throats on this day, in which they use two blessed candles held over each other and gently rested against the throat during the blessing.

Saint Blaise was a respected Armenian bishop who sought to foster both strong spiritual and physical health for those in his care in a country that was still suffering the persecution of Christians. Eventually, he was forced out of the city and into the country where he lived a life of deep prayer. Legend has it that a mother came to Blaise when her son had a bone stuck in his throat, and when Blaise commanded, the child coughed it up and was able to breathe normally again. Hence, the blessing of throats on Saint Blaise’s feast day. When Blaise was captured and tempted to make sacrifices to pagan idols, he refused. He was then beaten, hung from a tree with iron objects tearing at his body, and eventually, beheaded.

Saint Blaise teaches us courage and exemplifies Philippians 4:13, “I have the strength for everything through him who empowers me.” If you are striving to overcome sexual sin, ask Saint Blaise to pray for you to have the courage to look for an accountability partner. This is a huge step in finding freedom!

Saint Blaise may have been cast out of the city he lived in, but he also had the power to command a bone to be coughed out of a child’s choking mouth. Pornography has its own way of choking, by keeping one in the grip of temptation and lust. The next time you feel lust creeping in, think of Saint Blaise and use Jesus’ name to cast out the evil one from entering your heart, mind, and body.

Saint Pope John Paul II wrote about Saint Agatha in his 1994 Letter to Children during the Year of the Family. He included her in his list of holy children who lived in the first few centuries and are still honored in the Church today. He wrote, “For how many children in the history of the Church has the Eucharist been a source of spiritual strength, sometimes even heroic strength”.

Agatha was born to a wealthy family in Sicily and from a young age, she devoted her life solely to God and refused marriage. She was a young woman who exemplified chastity and innocence. These characteristics then attracted the attention of a high-ranking man named Quintian. Yet he did not have noble intentions but rather desired to possess her innocence. Agatha refused to abandon her faith and give up her virginity, resulting in Guintian arresting her and having her tortured in an effort to have her comply with his will. Instead, she prayed, “Jesus Christ, Lord of all, you see my heart, you know my desires. Possess all that I am. I am your sheep: make me worthy to overcome the devil.” Eventually, she was martyred by torture but died only after thanking the Lord for the patience she had to suffer and asking Him to receive her soul.

Do you find that your addiction to pornography has you tending towards the urge to possess and steal something which is not your own? In these moments, consider who it is that you may be viewing as an object rather than a real, living person who is someone’s daughter, sister, or even mother.

Josephine was born in Sudan in 1879 and was kidnapped at the age of seven. Her kidnappers named her “Bakhita” which means “fortunate,” a cruel name for a child whose early life was anything but so. She was purchased by several different families, including one master who used salt and a knife to tattoo her with over 100 cuts to her skin. She was eventually bought by a kind man and became a nanny in Italy. For a period of time, both she and the child she cared for were sent to live with the Canossian Sisters in Venice. This is where she received her first Sacraments of Baptism, Confirmation, and Communion and was able to enter the order herself in 1893. She died of pneumonia in 1947 with a heart reconciled to her kidnappers and torturers saying that if she were to meet them again she “would kneel and kiss their hands, for if that hadn’t happened, I would not be a Christian and a religious today.”

Josephine may have lived over a century ago, but children are still trafficked today. According to worldschildren.org 99% of victims who are trafficked for sexual exploitation are women and girls, many of whom are coerced by lies, threats, and violence. The Feast of St. Josephine Bakhita is on February 8, and Pope Francis has named this day as a day of prayer and action against human trafficking. Ask St. Josephine to strengthen you in self-control to fight against viewing pornography. As a woman who was trafficked herself, no doubt she will quickly come to your assistance, as I am sure she knows that many women in the porn industry are doing so unwillingly.

Saint Josephine Bakhita teaches us about forgiveness and mercy through her ability to forgive even those who inflicted the most pain in her life. While it is true that giving in to sin has the power to destroy relationships, God has greater power to restore them. Saint Josephine is your saint to call on when praying for forgiveness and healing in your own relationships, even if that's your spouse who has betrayed your trust because he or she used pornography.

Cyril and Methodius were brothers born in Greece who first became monks but eventually were called on to become active missionaries to the Slavs. In JPII’s encyclical, Slavorum Apostoli (The Apostles of the Slavs) he wrote, “For them, this task meant giving up not only a position of honour but also the contemplative life. It meant…undertaking a long pilgrimage in the service of the Gospel.”

Together, the brothers worked to translate Sacred Scripture from Greek into a language that the Slavic people could learn and understand. They are Saints today because they are shining examples of selflessness, courage, perseverance, and humility.

February 21: Saint Peter Damian (Bishop and Doctor of the Church)

In Peter’s own experience of being orphaned, he developed a great care for the poor. He eventually came out of poverty through the care of his older brother who was an archpriest in Ravenna. His older brother’s example led him to embrace the pursuit of holiness by wearing hair shirts beneath his clothes, fasting, spending time in prayer, and eventually joining the Benedictines. In his opinion, one needed to be careful of living too lavishly. When made a cardinal-bishop in Italy, he urged his brother priests to maintain celibacy, commitment to prayer, and overall self-discipline.

Saint Peter Damian teaches us self-discipline and not giving into worldly comforts. Lent is fast approaching. I’m not recommending wearing hair shirts or joining the Benedictines, but thinking of something to fast from is a great step in building greater self-discipline. Saying no to that coffee splurge, extra cookie, or even listening to music in the car are very helpful tools in strengthening the muscles of your will. Read more here to learn about the power of self-discipline and forming new habits and why both are essential in overcoming an addiction to pornography.

February 22: The Chair of Saint Peter the Apostle

I love Saint Peter because he’s a huge figure in the Church, but he made quite a few mistakes along his way, finding himself in some pretty embarrassing situations. There was the time when his doubt caused him to sink after Jesus invited him to walk out on the water, as well as his cowardice in denying his close friend Jesus not only once, but three times. Yes, Jesus loved him anyway. I know that I have fallen into the same sins not once, not three times, but countless times. Maybe you can’t count all of the times you have given in to the temptation to lust. Maybe you don’t feel worthy of God’s mercy in your life. But think of Peter! The Lord didn’t just hold out his hand to save Peter from sinking, but he made his church, Saint Peter’s Basilica, the arms reaching out to the whole world.

What Peter teaches us is the power of returning to Jesus both in humility and repentance. Despite the ways in which Peter fell short of virtue, Jesus still chose him to be the rock of the Church. This should give each one of us hope that no matter how grave our sin may be, the Lord will always be there to forgive us and embrace us, so long as we approach Him with the same heart that Peter did.

Saint Peter teaches us humility by his constant ability to go before the Lord with contrition. Overcoming sin is a constant battle. The devil is constantly lurking around every corner, waiting for his chance to pounce. It isn’t surprising when we fall into temptation, but we must always get back up, and as we do, kneel before the Lord with a contrite heart. When we do, he will lift us up the rest of the way, helping us to stand tall once again.

Prayer in Thanksgiving for the Witnesses of the Saints

Lord Jesus, thank you for the holy men and women you have sent before us to be great witnesses and companions in the faith. Thank you for showing us the courage of St. Blaise, the spiritual strength of St. Agatha, the forgiveness and mercy of Saint Josephine, the selflessness and perseverance of Saints Cyril and Methodius, the self-discipline of Saint Peter Damian, and the humility of the apostle, Saint Peter.

Consider asking these saints to join you in prayer in the nine-day Novena for Purity. God desires to bring you to a place of healing, and the saints desire to accompany you on the way. 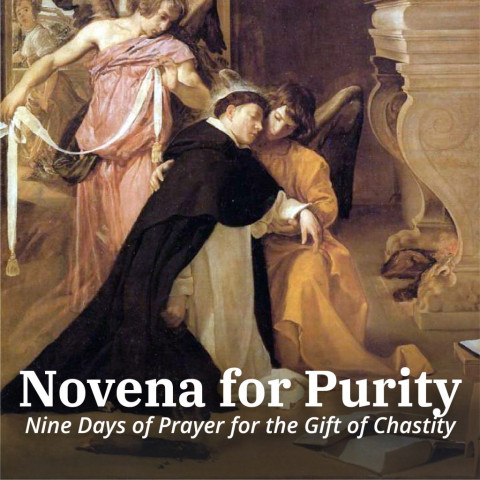 The Novena for Purity

Join Covenant Eyes and the Angelic Warfare Confraternity for nine days of focused prayer with the Novena for Purity, where you’ll ask God to strengthen you in various ways as you seek to live a life of purity.

Susanna Parent is a freelance writer and Wisconsin native, who now begins her mornings brewing French press coffee in the home she shares with her husband and children in the Twin Cities. When the sun sets, you’ll find her with friends enjoying a glass of red wine, preferably outside underneath twinkly lights. When not exploring all that the Twin Cities has to offer, she is indulging her wanderlust spirit by brainstorming their family's next new adventure.