As you struggle to envision a way of life and love rooted in a purified sexuality, you may feel that living that way is sometimes more illusory than the pornographic fantasies that enslaved us. But, living in a renewed sense of the reality of God’s creation of us as men and women in his image is not a fantasy.

This way of living is as real as Christ’s life, death, and resurrection. He did not come to love us and save us from some sins or from some forms of chaos and disorder. “Jesus Christ… came to restore creation to the purity of its origins” (Catechism of the Catholic Church, 2336). When we read words like that, especially if we have struggled with impurity of any kind for a long time, it may “bounce” off our consciousness, as if it only exists in theory, but not in reality.

Yet, God’s word reminds us Christ “is able to accomplish far more than all we ask or imagine, by the power at work within us” (Eph. 3:20). Let’s look at how to pursue what is possible for the future, by being awakened in prayer and actively remembering what God has done in the past.

The Taste of True Love

In the classic story, The Grinch Who Stole Christmas, an unforgettable moment occurs when the Grinch is caught red-handed by little Cindy-Lou-Who. There he is, alone in his shame before the huge, loving eyes of a little one who saw what he didn’t. In her imagination, she saw the reality of the Grinch’s goodness that he didn’t yet see about himself. Caught in the isolation of his loneliness, he set out to satisfy his thirst for belonging by taking what did not belong to him. But the illusory promise of that selfishness was challenged in the gaze of a little girl.

Her purity haunted him much more more than his evil haunted her. In the recent remake of the movie, Cindy Lou-Who takes things a step further. She seeks out the Grinch to invite him to a banquet that he doesn’t deserve. The selfish one whose heart is so small is personally invited by love to a table he never even imagined he could sit at, much less participate in. The explosion of love that awaits him seems more fantasy than the reality of his devilish plans he had been executing. But when he sees others singing and giving, one taste of that love fuels the deeper fire within him, the desire to love.

He Sees More Than Our Sin

In chapter 8 of John’s gospel, the Pharisees brought a woman who had been caught in the act of adultery before Jesus, and then, they reminded Jesus that the Mosaic law prescribed stoning as the consequence. Yet, Jesus saw a deeper reality before him. He saw more than her sin; he saw the woman. Recall the rest of the passage:

“Let him among you who is without sin be the first to cast a stone at her…But when they heard it, they went away one by one…and Jesus was left alone with the woman standing before him. Jesus looked up and said to her ‘Woman, where are they? Has no one condemned you?… Neither do I condemn you; go, and do not sin again” (John 8:7-11).

Jesus forgave her sin. But how did it happen? Not in a shame-filled diatribe against her in public but in the intimacy of a one-on-one conversation. She was alone with him.

What often fuels the shallow, impure fires that burn within us is the fantasy of curing our isolation with the promise of comfort and control through selfish sexual pleasure. When we grasp, we lose. But Jesus ended his conversation with the adulterous woman by looking into her eyes with love. From there, he charged her to go forth and live a renewed vision of life and love, to live the way she was meant to live.

While we don’t get to hear the rest of that woman’s story, I often imagine what went through her mind when she was left standing alone with Jesus. Suddenly, the fears of being alone collided with her fears of being known. In a matter of moments, she moves from being caught in the middle of her shameful acts by an angry crowd to being rescued in the intimate gaze of the One whom she had unknowingly desired her whole life.

What was her last memory before taking up her task to “go and sin no more”? Being alone with Jesus.

The Difference Between Imagination and Fantasy

Sometimes, we confuse the gift of our imagination with fantasy. Fantasy is a mental illusion, intentionally building something unreal in our mind’s eye. Yet, our imagination is rooted in reality. St. Ignatius of Loyola taught the gift of imaginative prayer. In fact, he noted:

“A step or two before the place where I am to contemplate or meditate, I will stand for the space of an Our Father and, with my consciousness raised on high, consider how the Lord my God looks upon me ” (Spiritual Exercises, 75).

He was teaching that the beginning of prayer is to imagine how our God of love gazes at us! Whether we are filled with peace and joy or fear and shame, resting in the gaze of the One who loves us calls us into relationship and renews our strength.

I have to believe that if the adulterous woman ever struggled with temptations to sexual sin again that she must have remembered the intimate gaze of Jesus when she had stood alone with him.

The imagination is not simply a memory of something that has happened in the past–it also builds upon our memories to bring new things to life. It is a creative, active receptivity, a cooperation of our human faculties of our minds with the power of the ever creative Spirit of God.

How can this help you to overcome pornography? I suggest three ways:

It’s been said that while one cannot choose which train comes into the station, one can choose whether or not to get on the train. We have the power to refrain and say no to things that we want which we know are not good.

But stopping there is not the end goal. Sin management does not equal love. The goal is to grow in the love of God, the love of others, and the love of ourselves.

We can choose to start building our own trains. Often, visual fragments of our memories of the past can suddenly surface in our mind’s eye, and the gift of our imagination, when suffering from sin, can lead us toward selfish fantasies. But, we can be proactive at these moments, by the grace of God.

When a specific memory of a pornographic image comes to mind, use your imagination to hold that memory in your hands and give it to Jesus.

This is a creative way to allow the darkness of your past choices to become illuminated by God’s love in the present moment! Imagine His face shining with approval over you as you offer him these gifts! Why? Because instead of running into the darkness of isolation and fear, hiding from His presence as Adam and Eve did in the garden of Eden after their first sin (Gen. 3:8), you are choosing to draw close to Christ through giving him your past and receiving his mercy anew at this moment.

This imaginative prayer exercise is a choice you can make to move past your past and with Christ’s help, move into the light of a hope-filled future with Love.

Choosing to imagine yourself giving a pornographic memory to Christ can be difficult, especially at a moment of temptation. But, like anything else, practice makes perfect.

Take some prayer time to “practice” taking hold of other memories and imagine yourself placing them into the hands of Jesus. As you become more accustomed to taking “every thought captive to Christ” (2 Cor. 10:5), you will become more proficient at taking “any thought” captive to Christ, even the ones that have been accompanied by lust, loneliness, disappointment, anger, fear, and shame.

It’s time to build momentum towards freedom and purity with good, holy images in our minds. St. Paul exhorts us:

Try taking one key holy image as your “go-to replacement” when impure images from the past pop into your mind. For example, if an impure image comes to mind, redirect your mind to imagine the Blessed Virgin Mary holding Jesus in Bethlehem. Imagine her serenity, her purity, her strength. Imagine St. Joseph (known as the Terror of Demons) standing nearby, alert, and ready to protect his holy family.

Another idea is to imagine Jesus, crucified and bleeding on the cross for your sins, gazing at you with love. Why is he hanging there? To free you from pornography and restore you to the purity of His original plan for you. Imagining this may be terribly difficult at first, and holy images may get mixed up with twisted ones or make a mess in your mind’s eye. Trying to redirect your negative mental domino-effect into pure mental momentum takes practicing this over and over when praying. During times when you are not mentally tempted, you can create a battle plan in your imagination that is real and strong spiritually and psychologically. 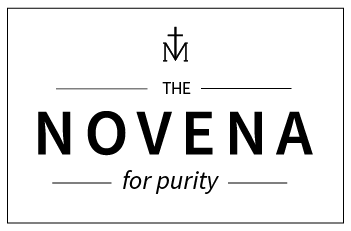 The Novena for Purity

Join Covenant Eyes and the Angelic Warfare Confraternity for nine days of focused prayer with the Novena for Purity, where you’ll ask God to strengthen you in various ways as you seek to live a life of purity.

Brian Butler is the Executive Director and Co-Founder of Dumb Ox Ministries a non-profit based in Louisiana, cultivating chastity and authentic love with teens, young adults and families via the lens of Saint Pope John Paul II’s teaching known as the Theology of the Body. Brian has authored several books and programs, including YOU: Life, Love & Theology of the Body. He is the founder of a dynamic retreat for teens and young adults called ECHO, and his latest book is entitled GARDEN Meditations. Brian’s BA is in Communications and he holds an MA in Theology. He enjoys music, sports and spending time with his wife, Lisa, and their four children.