It was the question that would change my life for the next 16 years. This question seemed quite harmless to an innocent 12-year-old just hanging out with his best friend, wasting time on the computer. Little did I know I was walking right into a pornographic trap.

When that first image pulled up, I didn’t even know what I was looking at. But as my friend continued to show me image after image, I realized two things: this was what a naked woman looked like, and she must be having sex. I was pretty convinced of the first one, but not having had “The Talk” at any point thus far with my parents, there was a curiosity to search for and find answers to know if the second one was true. If it was true, I wanted to learn everything about it, for it was all so new and mysterious.

Sure, I was raised Catholic and went to Mass every Sunday with my parents and younger brother. I also went to Religious Education classes every Wednesday night. Yet, despite all that, faith was not practiced in my home. After all, isn’t that the point of being a “practicing Catholic”? We didn’t pray the rosary. We didn’t pray before meals. We sometimes prayed a prayer before bed. Mostly, we took our meals and each went our separate ways to watch TV in four different rooms. So is it any wonder that sexuality was a topic that was avoided with my parents? In fact, when my mom did mention sex, she always spelled out the letters, as if it was something that was to remain hidden, something dirty, not a complete gift of self that was holy and Eucharistic.

I wasn’t experiencing shame, guilt, or any negative feelings, because I didn’t know it was wrong, let alone sin. As far as I was concerned, this was a natural part of growing up and learning about nakedness and sex. This was further confirmed when I found pornography in my mother’s dresser drawer. Yet, it never crossed my mind to talk with my parents about what I was doing.

The first moment of grace in this dark, hidden area entered my life while I was helping lead a Youth Rally for elementary students. We were having confessions, and it was the first time I could remember seeing an Examination of Conscience. As I looked through it half-heartedly, my eyes stopped on the Sixth and Ninth Commandments: Thou shalt not commit adultery and Thou shalt not covet thy neighbor’s wife. Under them, I read the questions: “Do I view pornographic material?” and “Did I commit the sin of masturbation?” My heart sank. I had been sinning. As quickly as possible, I went to confession, hoping that I would be free of these sinful actions for the rest of my life.

Unfortunately, it wasn’t that simple. Whether it was imperfect contrition or needing more help beyond confession and not having it, the addiction would continue. On top of this, now that I knew these actions were grave sins, each time I did them, my soul would be in danger.

And so began the Fall to Shame to Confession cycle, over and over again. It got to the point where I would go to the same priest so many times that I began priest hopping so it wouldn’t look like I was going to confession so many times; but in my heart, I knew the truth.

Throughout high school and college, the cycle continued. I lost friends, a girlfriend, and the trust of many people along the way. As I lost each of these, the addiction only got worse, pushing me further into isolation. I was angry. I knew what I was doing was sinful, and I wanted to stop, but I couldn’t. I prayed hard for God to take this cross from me. But it seemed like He wouldn’t.

My wife knew about my addiction. I came clean when she asked me right before I started courting her. Even through dating and engagement, I was honest and open about the times I would fall. I had to be. In some crazy way, she intuitively knew every time I would. She said I became more irritable in my interactions with her, which was a red flag as that wasn’t my normal response.

I still remember the first time I told her that I fell, about a month after we were married. I might as well have dropped an entire truckload of bricks on her. She was crushed, to put it lightly. She felt confused, angry, and broken-hearted, wondering how I could have cheated on her, especially with how healthy and active our physical intimacy was. I couldn’t blame her for any of these thoughts and feelings. I just hung my head in shame, apologized profusely, and promised to get to confession as soon as possible.

After more falls over the next couple of years and fighting nearly every day, my wife had had enough. She became cold and withdrawn and was deeply wounded. We were at a breaking point. If something didn’t change right then, our marriage might not have made it. Sure, we might have been married still, but as married singles, coming and going like two ships passing in the night.

Looking back on that now, I reflect on how sad it is that it took us getting to this point for me to finally wake up. From an outside look, I don’t understand why I was so bull-headed with getting help. Pride was my downfall. But the funny thing about hitting rock bottom is that it wakes a person up quite quickly. So it was for me. The Lord had me right where He wanted me. This was my second moment of grace.

The third moment of grace came as I confessed my sins to a priest with who I had been going to confession weekly trying to stay on top of the addiction. He had mentioned that there was a guy who was making himself available to help other guys who were struggling with pornography. I had ignored this suggestion previously, thinking I could do it alone, but this time I took him up on the offer. I reached out to him and began meeting with him regularly. This is also where I was introduced to Covenant Eyes. I purchased the monthly subscription and downloaded the app on my phone that very first meeting. He introduced me to loving accountability, which meant I was no longer alone in this battle.

Did this mean that I didn’t fall a couple more times? No. But it was easier to get up after each fall and start again. Eventually, the embarrassment of having to receive a phone call asking what happened wore me down. I began to resist temptation based on this. Soon, I was one week free. Then two. Then a month. Then two. Then six. The further I got from pornography and masturbation, the more I was able to clearly see the wounds I had caused and the lies that I had let myself believe for so many years. I began to invest in my relationship with Jesus, developing a regular prayer time and going on my first silent retreats. My wife and I signed up for Retrouvaille, a lifeline for hurting marriages, and began to work through the wounds and struggles that had been buried deep.

There was one final fall after about 18 months of freedom, which pulled me out of a lull where I had stopped praying regularly and had been engaging more in my phone and computer use. It made me recognize again that each day is a battle, and each day I need to run with everything I have towards Jesus, placing my head on His Most Sacred Heart and resting there always. The words of St. Paul were also brought very quickly to mind: “Therefore, whoever thinks he is standing secure should take care not to fall.” (1 Cor. 10:12) It is a battle that is beyond my strength, and I am okay with that. Because it is not beyond Jesus.

The nail in the coffin, per se, on the remaining hold this addiction had on me came when Cardinal Studios came out with STRIVE, a 21-day porn detox for men, created by Matt Fradd. It was $49, which seemed like a lot, but I knew that the Lord was calling me to it. Throughout those 21 days, my heart was convicted as Matt talked about the importance of accountability, how my sexual desire is not a bad thing but is a good and holy gift, how I can rediscover true beauty, and how freedom continues one day at a time. I also learned other truths about how pornography rewired my brain over the past 16 years and that I was inadvertently contributing to the ties between sex trafficking, sexual abuse, and pornography.

From that point to now, I haven’t looked back, other than to write this post and share a story of how God can take our brokenness and redeem it in ways we could never imagine. Little did I know that a few years later I would be working for Covenant Eyes, fighting the same battle, but this time helping many other men find the freedom I now have, by the grace of God. The best part? STRIVE is now a Covenant Eyes resource, and we offer it free to any man who wants to begin the journey to break their chains of slavery to pornography. More than 25,000 men have journeyed through to date, sharing stories of how it was the first time in 21 days that they had not looked at porn, how they can now see through the lies the sex industry tries to sell them, and how they have more time to focus on what’s truly important by being a loving husband and father. I cannot wait to see what the Lord does this year and in years to come with STRIVE, because I know personally that it’s a gamechanger.

In the end, I’m reminded of the words of St. John Paul II: “We are not the sum of our weaknesses and failures, we are the sum of the Father’s love for us.”

We are His beloved sons and daughters. He loves us infinitely and unconditionally, no matter how many times we fall and have to come crawling back. We get a glimpse of that love as we look upon the Cross and see how His only begotten Son poured Himself out for us. Jesus died for you. He died for me. And He would do it again if it meant we would rest always in His arms and the arms of our Heavenly Father. 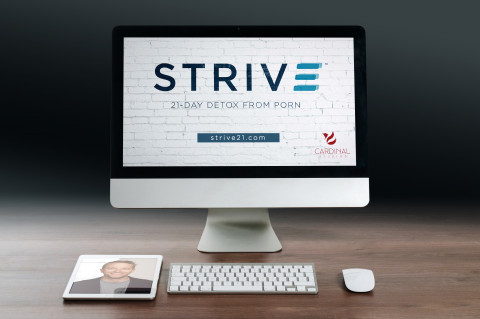 Brandon Clark is a Parish Support Specialist for Covenant Eyes. He works with parishes and diocese across the nation, providing the necessary resources to encourage the appropriate use of technology. He has been married to Tonia for six years, and they are overjoyed to be welcoming their first child into the world in May after six years of infertility.