This Easter will be one that we will most likely never forget.

Well, I will never forget the Easter of 2016, either. It was the day my (now) husband fell in love with me. He was either impressed at my culinary skills as I buzzed around the kitchen with my mother preparing the scalloped potatoes, carrots juliennes and pineapple glazed ham for Easter dinner followed by the 3-tiered chocolate raspberry cake (I haven’t prepared a similar spread since that day), or simply struck by the finery of my apron tossed over the light paisley Easter dress. Probably the latter.

But, this Easter 2020 is certainly one to remember. For weeks we have practiced social distancing to keep ourselves from an invisible enemy—an enemy that could literally kill us. In an unusual way, it has beckoned all of us—believers or not—to a new transformation of minds and hearts. From this time forward, everything will hold new meaning and value for us, even common things like washing our hands, picking up groceries, etc. Nothing can be taken for granted, because the fear of death has surrounded us everywhere.

Death Has Been Conquered

Easter is a reminder to us that death has been conquered. One of the greatest ironies, though, is that Christ conquered death by His own death. By dying on the cross, sin and death were vanquished. It was by assuming our frail, broken flesh that our humanity could be redeemed.

Similarly, the Book of Numbers recounts how Moses was instructed by God to mount a serpent on a pole. By gazing on the serpent, the Israelites who had been afflicted by serpents were healed.

Venerable Fulton Sheen explains that these are the two greatest banners ever unfurled: the uplifted serpent and the uplifted Savior.

“As the brass serpent had the appearance of a serpent and yet lacked its venom, so too, when he [Jesus] would be lifted up upon the bars of the cross, he would have the appearance of a sinner and yet be without sin. As all who looked upon him with love and faith would be healed of the bite of the serpent of evil.”

The serpent was lifted on the pole in the desert to heal the Israelites of the venomous wounds inflicted by serpents; Christ was lifted on the cross to heal broken humanity of the mortal wound of sin. All of us who are in need of healing, especially from the sins associated with the flesh, are summoned to look up—to lift our eyes to behold our salvation.

Privileged to Gaze Upon the Risen Christ

No one knows this story of beholding one’s Savior like Mary Magdalene. She had been held captive to the lies of the flesh for much of her life. But then Jesus came into her life and captivated her gaze. It was the beginning of her transformation which culminated at the cross. There, she looked up and beheld her Savior.

Mary Magdalen was privileged to gaze up towards the One who had come to save her—and all of us—from slavery to sin. But she was also privileged to gaze upon the Risen Christ when, three days later, she was at the tomb. Instead, of finding the body that had hung from the cross, she finds the Risen Lord. “Mary,” He says. “Rabboni!” she replies, and she hastens to embrace her dear friend.

I wonder what must have been her surprise when He says,

“Do not hold me, for I have not yet ascended to the Father; but go to my brethren and say to them, I am ascending to my Father and your Father, to my God and your God.” (John 20:17)

Scripture scholars say that she probably was grasping for the Jesus she knew, but this Jesus was now alive and different. He was asking her to refrain from seizing the Jesus she remembered, and to rejoice instead, in the Jesus that she found: a resurrected Lord.

Easter is a Time to Commit Ourselves

The significance of this beckoning by Jesus is profound. He asks Maria Magdalen to let go of the past: of her sins, of her weak flesh, and even of the Jesus who had lifted her from the grave of her former self. He is asking her to join in the Easter triumph of the resurrection that has renewed His body and is renewing hers. He beckons her to lift her eyes to the heavens where the cross gleams triumphant. From there comes our salvation.

Can the triumph of Christ’s resurrection draw our eyes higher than our failings, and even the cross of Christ? Can our eyes gaze towards the heavens and be transformed by that eternal light?

God desires the beauty of eternity to be beholden by our eyes. This is the beauty that our souls long for—a beauty that far surpasses the beauty of our flesh,broken and bruised here on earth. When our bodies are resurrected on the last day, we will see ourselves and others bathed in the light of this holy beauty.

Easter is a time to commit ourselves to lifting our eyes towards the One who redeems us, transforms us, and lifts us with Him to behold a glory beyond all understanding. 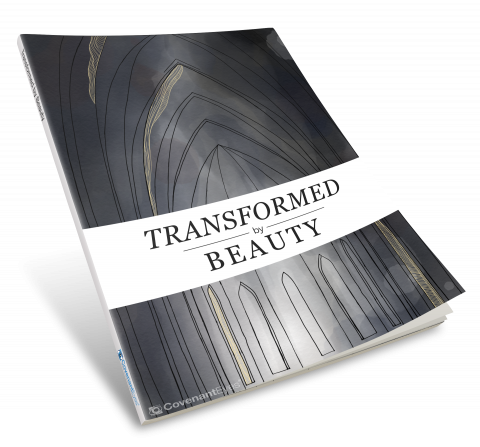 In this ebook, you’ll meet a priest, a musician, a ballerina, and a bodybuilder who all have one thing in common: They found freedom, healing, and peace because they encountered the beauty of a transcendent God.

Julia Dezelski, STD is Assistant Director for Marriage and Family at the U.S. Conference of Catholic Bishops. She lives with her growing family in the Washington, DC area.