The short answer to that question is too much.

October is Domestic Violence Awareness Month. Fittingly, October is also Respect Life Month, a time of the year when the dignity of every human life is remembered and honored. If a home is meant to be a place of welcoming and receiving life - a safe haven of peace and wholeness - a violent home can become a place where life is shunned by fear and stifled by brokenness.

Violence in the home can be one of the most devastating experiences of family life, but it is not a new phenomenon. I once visited the small village of Cascia in Italy where a holy woman, born in the 14th century, is honored to this day. Rita was the wife of the violent Paolo Mancini. Although she endured his insults, physical abuse, and infidelities for many years, she eventually won him over to a life of honor by her example of Christian fidelity and love. No wonder she is still prayed to for impossible causes, marital problems, and abuse.

Although the violence of mankind is ages old, it is further aggravated today by the insidious domestic intruder called pornography.

The use of pornography by the abusive partner fuels marital rape and other forms of sexual abuse with its stream of provocative imagery and distortions of sexual activity. Research shows that, “pornography use by batters is associated with learning about sex through pornography, imitation of behaviors seen in pornography, comparison of women to pornography performers, introduction of other sexual partners, filming sexual acts without consent, and the broader culture of pornography (e.g., fetishes).”[ii]

Create in Me a Clean Heart

In their Pastoral Response to Pornography, Create in Me a Clean Heart, the Catholic bishops of the United States reminded us of the tragic effects of pornography that include the impact on the family, especially if pornography addiction leads to divorce.

The violation of the family starts with the violation committed against the marriage covenant between the spouses. Pornography, the bishops state, “violates marital chastity and the dignity of the spouses.” For this reason, “using or creating pornography within marriage is always wrong and can never be justified.”[iii] The same is true of domestic violence as a direct violation of the equal dignity of men and women and relationships based on mutuality and love.[iv]

To make our homes safe havens of love and life, pornography must not be welcome there, nor in our hearts. It tears at the fabric of marital commitment and family bonds. If left to fester, it can turn a home into a hell.

For the sake of peace in the home, keep pornography out of it.

[ii]Ibid. See also C. Simmons, P. Lehmann, and S. Collier-Tenison, “Linking Male Use of the Sex Industry to Controlling Behaviors in Violent Relationships: An Exploratory Analysis,” Violence Against Women 14, no. 4 (2008): 406– 417.

[iii]Create in Me a Clean Heart: A Pastoral Response to Pornography, United States Conference of Catholic Bishops, Washington, DC (2015), p. 14.

[iv]See When I Call for Help: A Pastoral Response to Domestic Violence against Women, United States Conference of Catholic Bishops, Washington, DC (1992, 2002). 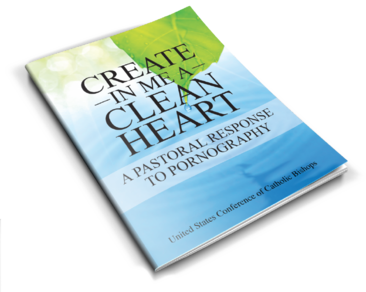 Create in Me a Clean Heart: A Pastoral Response to Pornography

Create in Me a Clean Heart offers a robust vision to help people heal from the negative effects of pornography and to protect young people from its dangers. It gives those who struggle with pornography hope that freedom from its grip is possible.

Julia Dezelski, STD is Assistant Director for Marriage and Family at the U.S. Conference of Catholic Bishops. She lives with her growing family in the Washington, DC area.