Right now, you might be very focused on getting rid of the bad habit of pornography. Unfortunately, sometimes that focus works against us.

If you are trying to break free of pornography, it helps to understand how habits work. Most people find it incredibly difficult to simply stop a bad habit unless they have a good habit to replace it.

Covenant Eyes has an eBook called Hobbies and Habits that can help you identify a good habit for your situation. But to start a new habit, we have to learn how habits work in the first place.

The good news about votes is they take the pressure off your failures. Failing to exercise one morning or falling back into watching pornography once is only one vote. You can replace it by two the next time. The bad news is when it comes to bad habits, we already have a huge deficit of votes for negative scripts. It takes consistent votes in the positive direction to change that.

Use Triggers to Your Advantage

Triggers are more common than you may think. Morning breath triggers you to brush your teeth. A yellow light triggers you to slow down (or at least it should.) Triggers are a way to signal to our brain that it is time to perform a routine task. So, if you want to create a routine good habit, you should find something that triggers that activity.

Habit Stacks are your Friends

The best way to create a new trigger for a new habit is to put it at the end of a “habit stack.” A habit stack is a series of routine actions that all serve as triggers for the next action. For instance, you unlock your car which triggers opening the door, sitting down, buckling, starting the car, putting it in reverse, checking behind you, and pulling out of the driveway.

Your morning and evening routines are great place to put a new habit. Let's say your habit in the morning is to wake up and go to the bathroom, you see your toothbrush which triggers you to brush your teeth, then shower, then go down to the kitchen to eat breakfast. Say you’re an old man like me and make oatmeal every morning. Waiting for your oatmeal could serve as a trigger for your new habit: doing ten pushups.

Do It on Easy Mode

The best piece of advice I can give for creating good habits is: Do it on easy mode. Don’t attempt life-altering habits like a two-hour daily workout or journaling 3,000 words per day if you don’t already do something close to that. Don’t make anything harder than it needs to be.

Little things like that may seem insignificant, but you’d be surprised how many times I’ve almost skipped my workout and said, “Eh, I already put my workout clothes on, I might as well go.” Laziness can make you more productive if you use it correctly.

When you cast votes, use good triggers, and habit stacks, you make this journey much easier on yourself. Not only will you break free of pornography, you’ll also have some good habits to show for it. 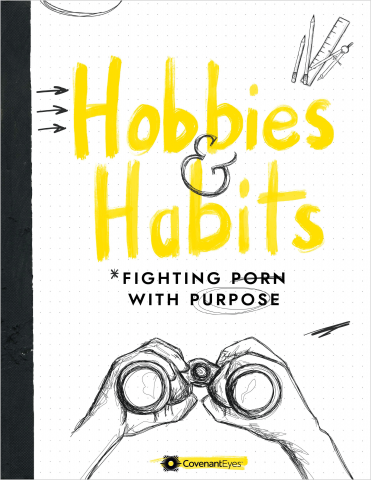